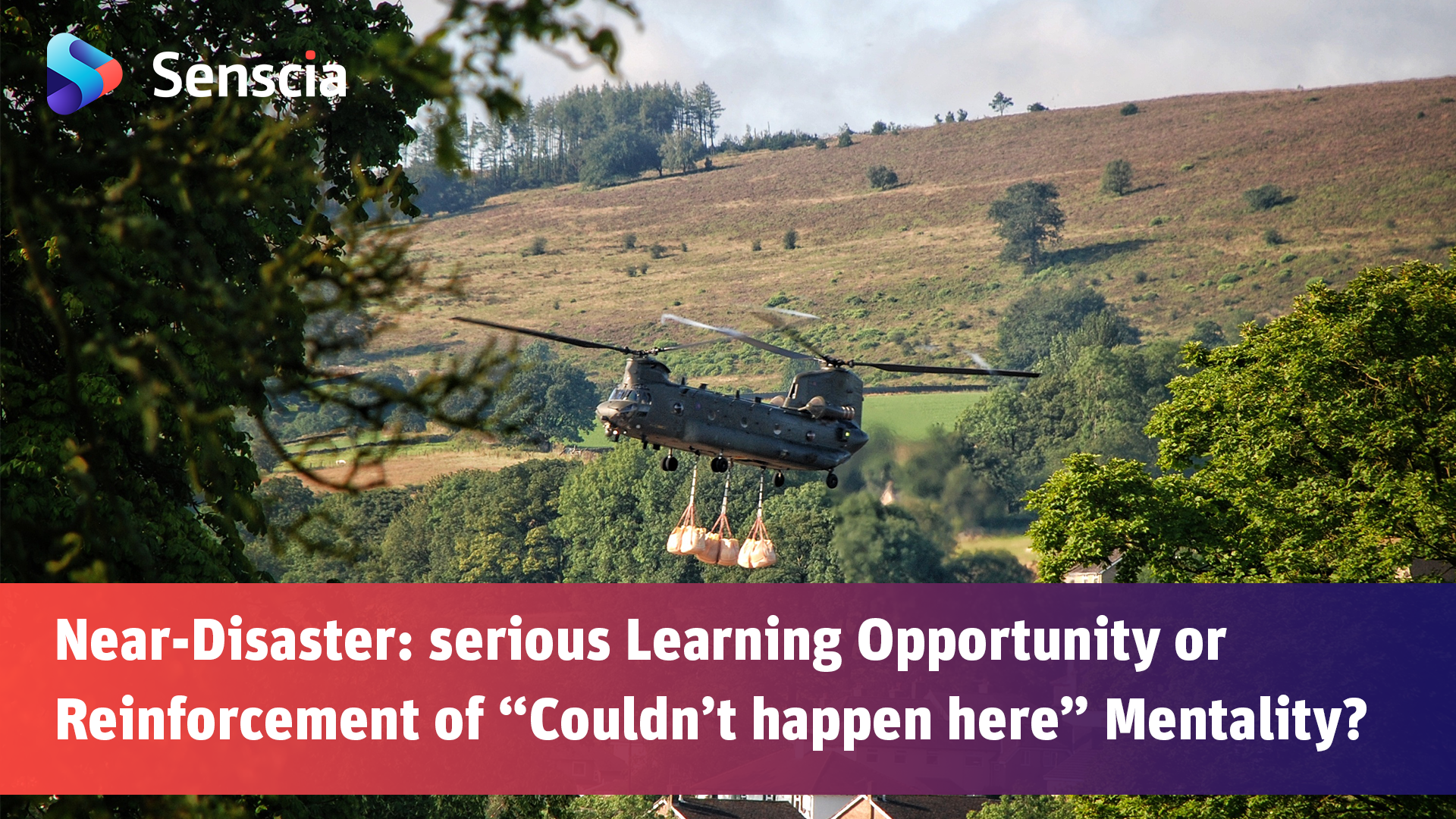 When the summer storms of 2019 swept across the Midlands and the North of England, the neighbours of the little town of Whaley Bridge never expected that in a couple of hours they would become characters to a Hollywood blockbuster-worthy near miss incident .

After days of heavy rainfall, the water levels in the 180-year-old Toddbrook Reservoir, which holds back 14 megalitres of water (6 full-size Olympic swimming pools might be easier to imagine), had reached the dam’s crest. Prior to the 1st August, visitors to the dam had seen vegetation growing on the spillway, an edifice built to control the release of flow from the dam. The vegetation was a clear sign of a compromised structure, where water was filtering through the concrete; a very tangible Key Risk Indicator (KRI).

The additional pressure from the flood water had made the panels on the side of the dam start to collapse, exposing the clay bank beneath it. The lives of thousands of residents in the town of Whaley Bridge, downstream from the reservoir, were at risk of being buried under water, mud and debris. Unbeknown to them, a 1,000 body bags had been transported into the area. A major disaster was imminent.

A Hero-Idiot for the occasion

By 2:30 pm on the 1st August 2019, the situation was so dire that a local evacuation was ordered. A quarter of the town’s residents were told they would probably not have a home to return to.

One man has subsequently been identified as almost single-handedly saving the dam and the town below it. Police Constable Geoff Marshall walked out on to the crumbling section of wall to place sandbags handed to him, 400 in total, whilst specialist fire crews with high volume pumps that had been rushed in from all over the country, rushed to empty the reservoir. Marshall managed to raise the height of the spillway so that water did not rush over the top and accelerate the damage to the panels below. Water had been collecting in whirlpools at his feet, showing that the dam was liable to totally collapse at any given moment.

His willingness to take an extreme risk because of his sense of professional responsibility resulted in him being nominated for a bravery award. However, the policeman’s wife chastised him for “being an idiot” whilst also saying she was “very proud of him”.

Overnight 400 tonnes of aggregate were dropped in place by a Chinook helicopter, to divert water and shore up the weakened dam.  The dam was eventually reduced to a tenth of its original level and residents had to stay away for an entire week.

An alarm rings and nothing happens

This wasn’t the first time that the dam had experienced this type of damage. The existing spillway had been installed in 1969 after it had suffered similar damage in the winter of 1964. Earthfill dams, (or Embankment dams, as they are also known), are built by compacting layers of soil and gravel. Spillways are key for the safety of earthfill dams as they are a protective layer over the earth embankment, which makes it difficult for the water to wash away the downstream side of the dam when water overflows. Such dams are less rigid, are more susceptible to failure, and therefore require more regular inspections and maintenance.

The last inspection of the dam had been ordered by its owners, the Canal and River Trust (CRT), in November 2018.  The independent Inspecting Engineer’s (IE) report followed up with his own and submitted a report to the CRT, warning them about the problems he found with the spillway and advised them to carry out necessary repairs in order to avoid a collapse event.

The rainfall levels leading up to the August 1st incident in 2019 were certainly unusual. A 1 in 43 years rainfall event was followed a couple of days later on 31st July with a 1 in 92 years level and these two combined together made a significant combined event. For those of us who manage long term risks associated with changing climate, we should beware of such shifts in our ‘normal baseline’ and how sensitive our organisation is to these slow changes.

At the time when all this water entered the reservoir, none of the maintenance actions proposed in the IE’s report had even begun. For some people, this looked like negligence on the part of the owners.

Both the government and the CRT ordered enquiries into the incident. A significant finding was that there were “a number of indications that the dam and in particular the auxiliary spillway was in distress” and that neither the IE or CRT’s own Supervising Engineer (SE), “although fully informed of the potential for a problem to arise… did not seem to understand the severity of the problem… or report it further up the organisation with sufficient importance”.

It takes deliberate effort to shape your organisation’s risk culture, to recognise the danger of normalisation of deviance in its infancy.

Dam safety incidents are not that uncommon. A US database has records of over a thousand such incidents.  They very rarely result in tragedy. After all, no-one really talks about the incident at Toddbrook in 1964. Whaley Bridge did not become deserted as residents moved out of the area, unable to live with the risk that the dam presented. In fact, data suggests that since the near-collapse of the dam in 2019, house prices in the vicinity have risen 5-10%, bucking regional trends. Why?

This should be a cause for concern for risk managers. It would be logical that a significant risk near-miss would scare people, whether they are engineers, responsible managers, local residents or politicians. By extension, we would like to imagine that if such a near-miss were to happen in our organisation, we would expect a persistent elevation of risk sensitivity amongst our colleagues.

In the world of risk thinking, what is logical, is not necessarily what is normal.

In NASA’s investigative report into the loss of the Columbia space shuttle (2003), it was found that the shedding of external tank insulation foam had a long history. It was a known problem that violated design requirements, jeopardised safety and presented an unacceptable risk. But with each successful landing, it was increasingly regarded that the foam-shedding was almost inevitable.

Near-misses, where total failure is avoided by chance, come to be normalised as part of success. It’s not that people just become forgetful or negligent. Subconsciously they accept a lowering of risk margins, or a deviation from a specific safety standard, because they got away with it last time, so they’ll get away with it again. Logical risk thinking might consider statistical probabilities, but flawed human cognition allows us to nudge ever closer to significant danger without realising we are doing so.

Maintenance schedules are relaxed, risk reviews are de-prioritised, product quality is outsourced to suppliers, testing resources are squeezed, budgets for resilience are taken away. Profits visibly go up but risks accumulate in dark, murky pools. It takes deliberate effort to shape your organisation’s risk culture, to recognise the danger of normalisation of deviance in its infancy. This is a really important part of the risk management programme, because we can’t rely on having heroes like PC Geoff Marshall to save us.

Need help in getting your risk messages across? Get in touch here.